2 of Yuli's up and coming badminton stars were invited to take part at the Under 15s National Camp which was held at Sydney during the same time as the Australian Open.

The training camp was paid for by Badminton Australia with the top 2 male and female players from each state being invited to take part.

Daphne Wan and Milain Ranasinghe were picked to represent WA. They did well in the training camp and were both ranked quite highly. WA will expect them to do well in the Under 15s nationals which will commence in October.

Milain got to walk on court carrying the bag of the eventual Aus Open Winner Chen Long. 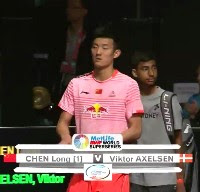 And also from BAWA's newsletter were the following info :